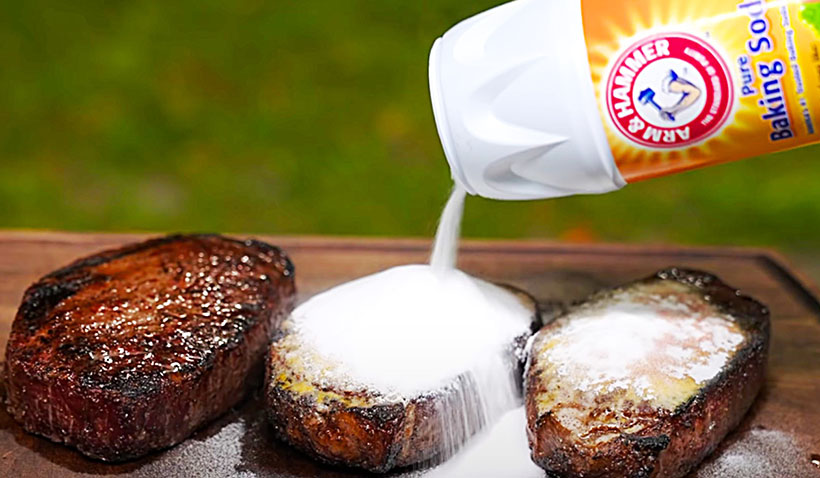 Cooks have rediscovered the old-fashioned practice of soaking meat in salty water, or brine, to add moisture and tenderize harder pieces. When the salt in the brine is replaced with baking soda, something surprisingly different but equally delicious occurs. Brine produced with either salt or baking soda may tenderize meat, but the two components have differing effects, with baking soda acting faster.

Brine serves to keep meat wet by encouraging muscle fibers to absorb more water. Salt does this via a process known as “denaturing,” which causes coiled protein in the meat to unwind and generate strings that connect to water. Meat tenderized with brine often weighs 6 to 8 percent more before cooking due to the extra water. This approach helps to guarantee that the meat does not dry out during cooking.

A baking soda and water solution to tenderize meat works in a different way. Baking soda works as an antacid. In other words, it neutralizes acid. Baking soda, rather of “denaturing” the meat like salt does, elevates the pH on the surface of the flesh, making the exterior more alkaline. This chemical process makes it more difficult for animal proteins to bind together. When the proteins do not bind, the flesh remains soft when cooked rather than constricting and becoming tough.

Another benefit of a baking soda tenderizing solution over saltwater brine is its efficiency. Meat simply has to rest in a baking soda solution for 15 to 20 minutes, while brine needs at least 30 minutes to operate. Professional chef tests have shown that soaking the meat in baking soda for longer than advised (say, 30 to 45 minutes instead of 15 minutes) does no damage. Over-brining with saltwater, on the other hand, may harm the meat, rendering it gray and mushy.

Less Is More With Baking Soda

Tenderizing meat using baking soda solution requires fewer ingredients than saltwater brine. Because ground beef has a larger surface area to influence, a solution adequate to cover 12 ounces of ground beef requires only 14 teaspoon of baking soda to a pint of water. A teaspoon of baking soda is mixed into a solution of 12 ounces of chicken or pork slices. Saltwater brine, on the other hand, begins with half a cup of salt to a quart of water for chicken pieces that must soak for two hours to enjoy the full advantages of the brine.

How To Use Baking Soda To Tenderize Meat?

Baking soda may be used to tenderize chicken, beef, and even lamb. One teaspoon of baking soda for 2 pounds of beef is all that is required. If you use more than that, it will impart an unpleasant flavor to your meat.

You may sprinkle the powder over the meat and then thoroughly mix everything together. A preferable way is to dissolve it in a little amount of water and then pour it over the meat, mixing afterward.

Baking soda can make tough portions of meat, such as beef ribs, extremely soft in only 30 minutes. Look it up on our website and see for yourself. Try it with different slow-cooked cuts of beef, such as brisket and neck. It goes nicely with any kind of meat!

When the meat is soaked in a baking soda solution, the pH level on the flesh’s surface rises. As a result, excessive protein bonding is challenging. As a consequence, when cooked, the flesh is more soft and juicy.

All steaks are not made equal. Even the most costly cuts may be “chewy” at times. Especially steaks that have not been properly dry-aged. Baking soda may also be used in certain situations. Some people use baking soda to tenderize meat. The idea here is not to go overboard; don’t use too much baking soda or you’ll damage your steak!

Using tiny quantities of baking soda is typically not harmful. However, owing to the high salt concentration of the powder, ingesting or consuming significant quantities of it might be hazardous. As a result, don’t overdo it. A teaspoon per 2 pounds of beef is enough.

Best Way To Use Baking Soda?

Just be sure you use baking soda rather than baking powder. Although they sound almost identical, they are not the same thing.

Remember to rinse the meat to remove the baking soda. I heard of individuals neglecting this, and the meat tasted mediocre.

I need to go through the 15 minutes to 3 hours I said in greater detail.

A thin cut, such as a boneless skinless chicken breast, just requires a brief soak in the water/baking soda solution.

I haven’t seen any other advice about how long to soak, but after I test it, I’ll add it to this page.

Of course, there are several different methods for tenderizing meat. To be honest, I’ve tried several others, including apple juice, orange juice, and other citrus fruits. They all work well, but this new method of just utilizing baking soda is both simple and inexpensive.

To keep meat soft, we use baking soda diluted in water in certain of our recipes. What happens if you leave the solution on the meat for more than the recommended 15 to 20 minutes?

Briefly soaking meat in a baking soda and water solution elevates the pH on the surface of the flesh, making it more difficult for proteins to link excessively, keeping the meat soft and juicy when cooked. Our dishes, such as our Vietnamese-Style Caramel Chicken with Broccoli, normally call for a 15- to 20-minute treatment, but what if your dinner preparation is delayed, doubling or even tripling that time?

To see whether soaking for more than 15 to 20 minutes would do more damage than good, we soaked 12 ounces of ground beef, sliced chicken breast, and sliced pork for varying amounts of time before cooking them—14 teaspoon for the beef and 1 teaspoon for the sliced meats. We were astonished to see that samples treated for 45 minutes were similar to those simply treated for 15 minutes.

This is why: The acid/base interaction occurs swiftly and does not accumulate much over time. In fact, when we weighed the treated ground beef samples before and after cooking, we discovered that the 45-minute-treated meat retained just 3% more moisture when cooked than the 15-minute-treated meat.

Although fifteen minutes is sufficient time to receive the advantages of a baking soda treatment, don’t be concerned if your dinner preparation is interrupted and you need to prolong that time.

A 15-minute (or slightly longer) soak in a solution of water and baking soda before cooking keeps meat tender and juicy.